Mykonos is a Greek island, in the Aegean sea, lying between Tinos, Syros, Paros and Naxos. Mykonos Island Greece, belongs to Cyclades islands.  Has an area of 85.5 square kilometres  and  10,134 inhabitants. The capital of the island is Chora. Mykonos’s nickname is “The Island of the Winds”.  That is due to the very strong winds that usually blow on the island.

In Greek mythology, Mykonos was named after its first ruler, Mykonos  the grandson of the god Apollo and a local hero. According to Herodotus,  Carians was the original inhabitants of the island. Ionians from Athens seem to have followed next in the early 11th century BC. There were many people living on the neighbouring island of Delos, only 2 km away, which meant that Mykonos became an important place for supplies and transit. During ancient times Mykonos island was  poor with limited agricultural resources. Its inhabitants were polytheists and worshipped many gods. Mykonos came under the control of the Romans and then became part of the Byzantine Empire until the 12th century. In 1204, with the fall of Constantinople in the Fourth Crusade, Mykonos was occupied by Andrea Ghisi.  In 1537, the island of Mykonos became a part of Ottoman empire. During the Greek Revolution against the Ottoman Empire in 1821, Mykonos played an important role.

In contrast to other Cycladic island capitals, the capital of the island Chora, is not built in the shape of an amphitheatre but instead spreads out over a wide area.  Stroll around its narrow marble streets and admire whitewashed houses with colourful doors and window frames, bougainvillea trees in purple bloom and hidden churches. Pay a visit to the church of Panaghia Paraportiani, the Town hall and the castle situated above the harbour. Don’t forget to visit the Archaeological, Folklore and Maritime Museums to take in a little history. Wander around the pedestrian shopping streets of  Chora, always colourful and busy. The most glamorous of all is Matogianni Street, lined with brand name stores, charming cafés and stylish restaurants. One of the most scenic corners of Mykonos Island Greece is  “Little Venice”, an 18th century district, dominated by grand captains’ mansions with colourful balconies and stylish windows. With balconies perched over the sea, pictures of the famous Italian city spring to mind. Relax at a waterfront café and admire the view of the quaint windmills standing imposingly on the hillside above, set against a luminous blue backdrop. The second traditional settlement of Mykonos island is Áno Merá, situated around the historic monastery of Panayia Tourliani of 16th century. To the north, in Fteliá, lies an important Neolithic settlement, and a 14th-13th century BC Mycenaean tomb.

The island is a paradise for water sport enthusiasts. It is only natural that the “Island of the Winds” should attract surfers and sailors from all over the world. There is a great choice of beaches for windsurfing. On the island you can find many well-organized diving centers and stores specializing in diving equipment. Explore the island on boat and discover secluded beaches, or take a boat tour around the nearby islets, which are also ideal fishing spots. You can take the opportunity to explore the tiny archaeological gem of Delos, just a short boat trip away. Delos was a sacred island in ancient times, and according to mythology was the birthplace of the twin gods Apollo and Artemis.

Among the local products of Mykonos island, you can taste Kopanisti cheese (a soft cheese seasoned with pepper ), Louza meat (cooked pork filet with spices ), Mykonian Sausage (sprinkled with pepper, and local oregano  and dried in the north wind ), Amygdalota pastries (small round cakes with ground almond, rosewater and caster sugar) , Honey pie. There are numerous hotels of several categories and rental rooms for  every budget in Chora and other settlements beside the beaches, around the island. Also there are plenty of restaurants and local taverns serving local dishes, Mediterranean and International cuisine. The nightlife of Mykonos is famous to all over the world. The visitor, can reach the island by international or domestic flights or by ferry from Piraeus and Rafina port.

Mykonos Greece  is the most famous cosmopolitan island, a whitewashed paradise in the heart of Aegean Sea  where glamour meets simplicity. On Mykonos Island Greece, celebrities, college students and families  celebrate altogether  the Greek summer.

The best  17 beaches of Mykonos island are the following :

The best way to discover the beauties of Mykonos island and enjoy your holidays, is to choose the holiday packages organized by Kaningos Tours :  Holidays in Mykonos. 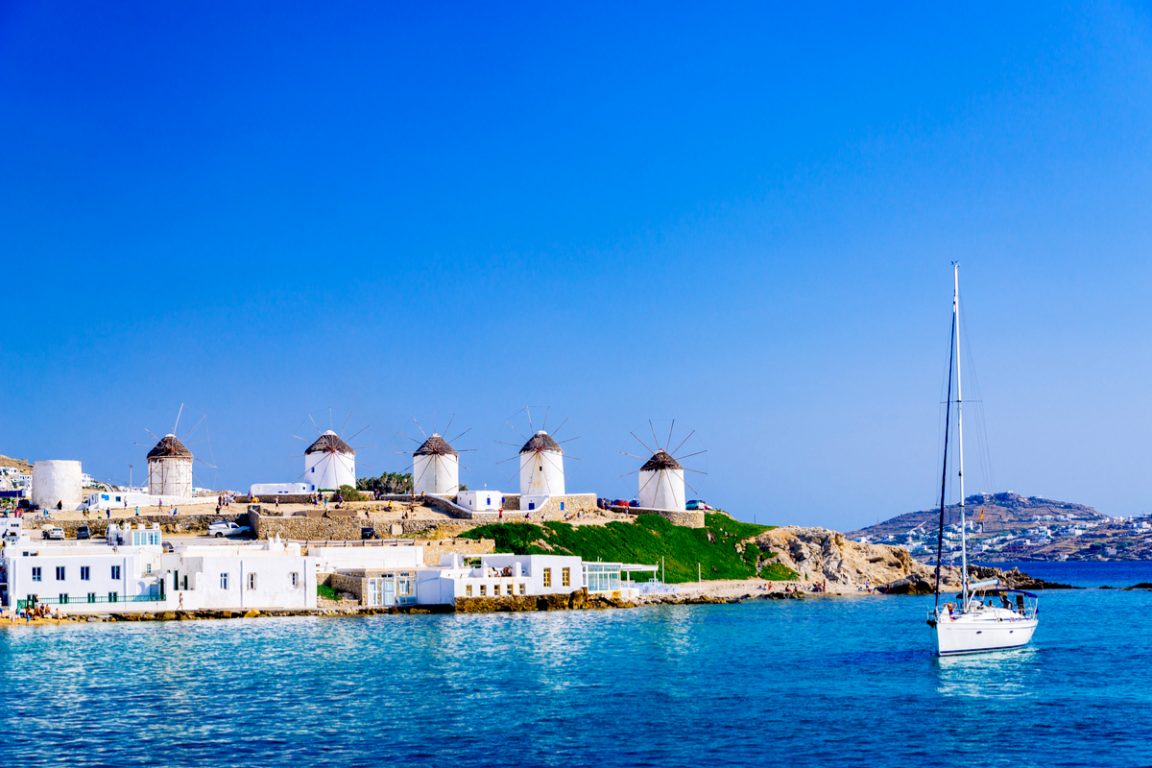 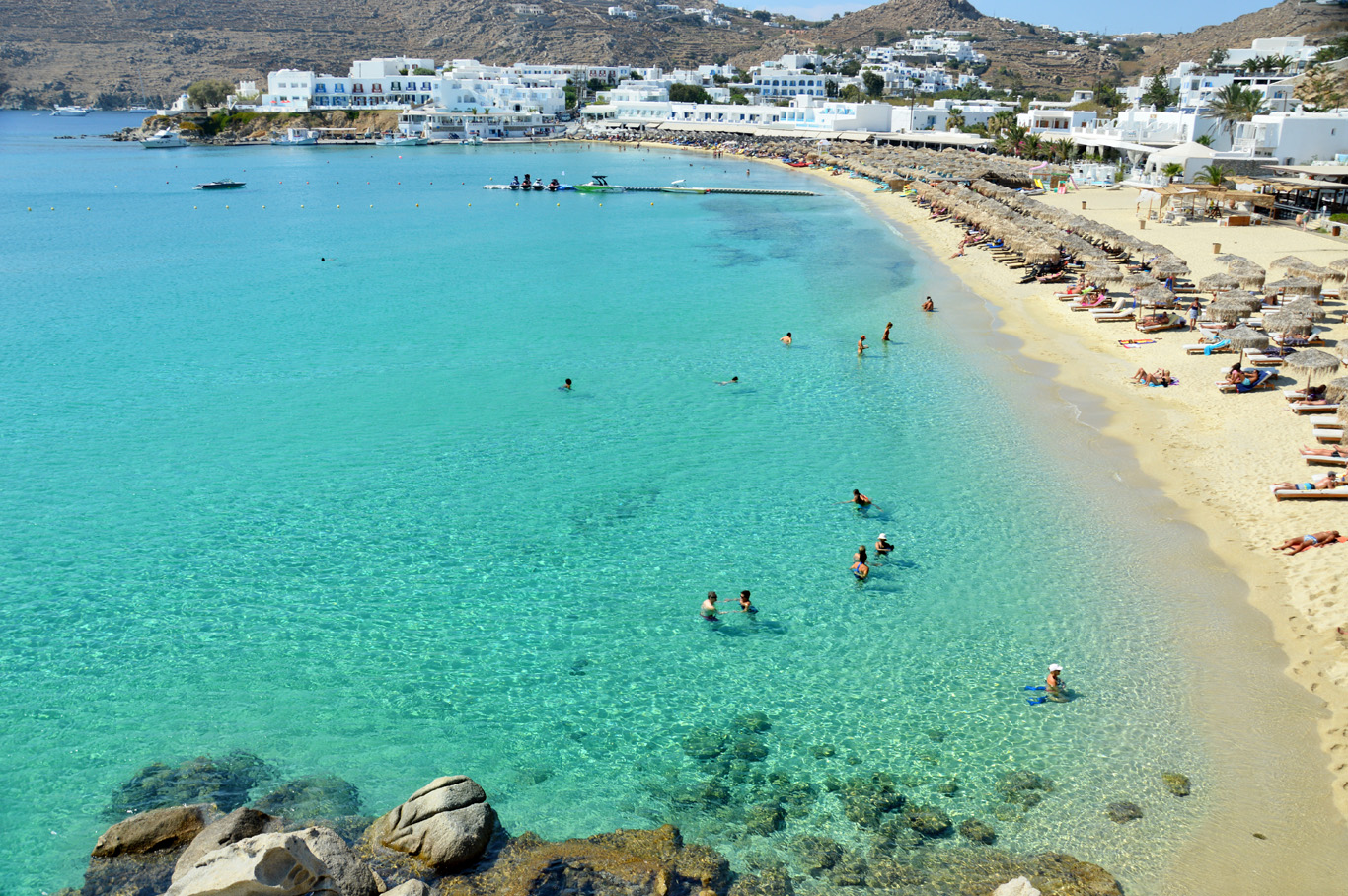 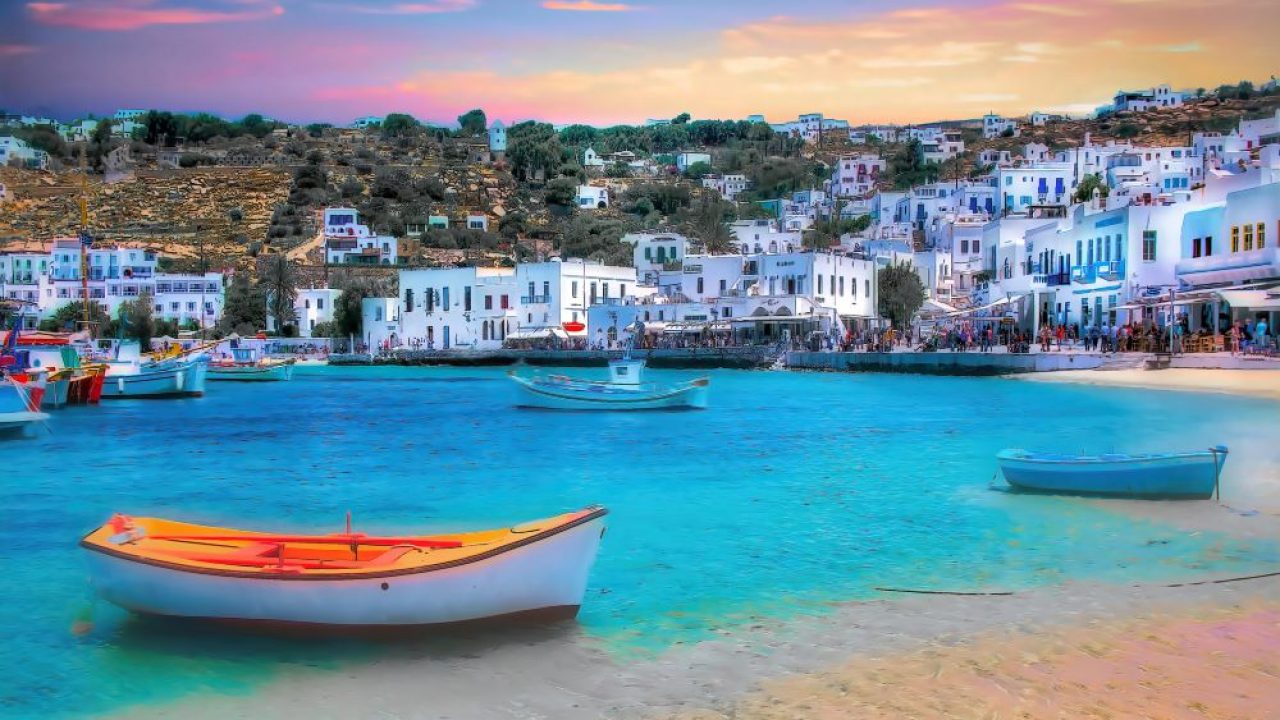 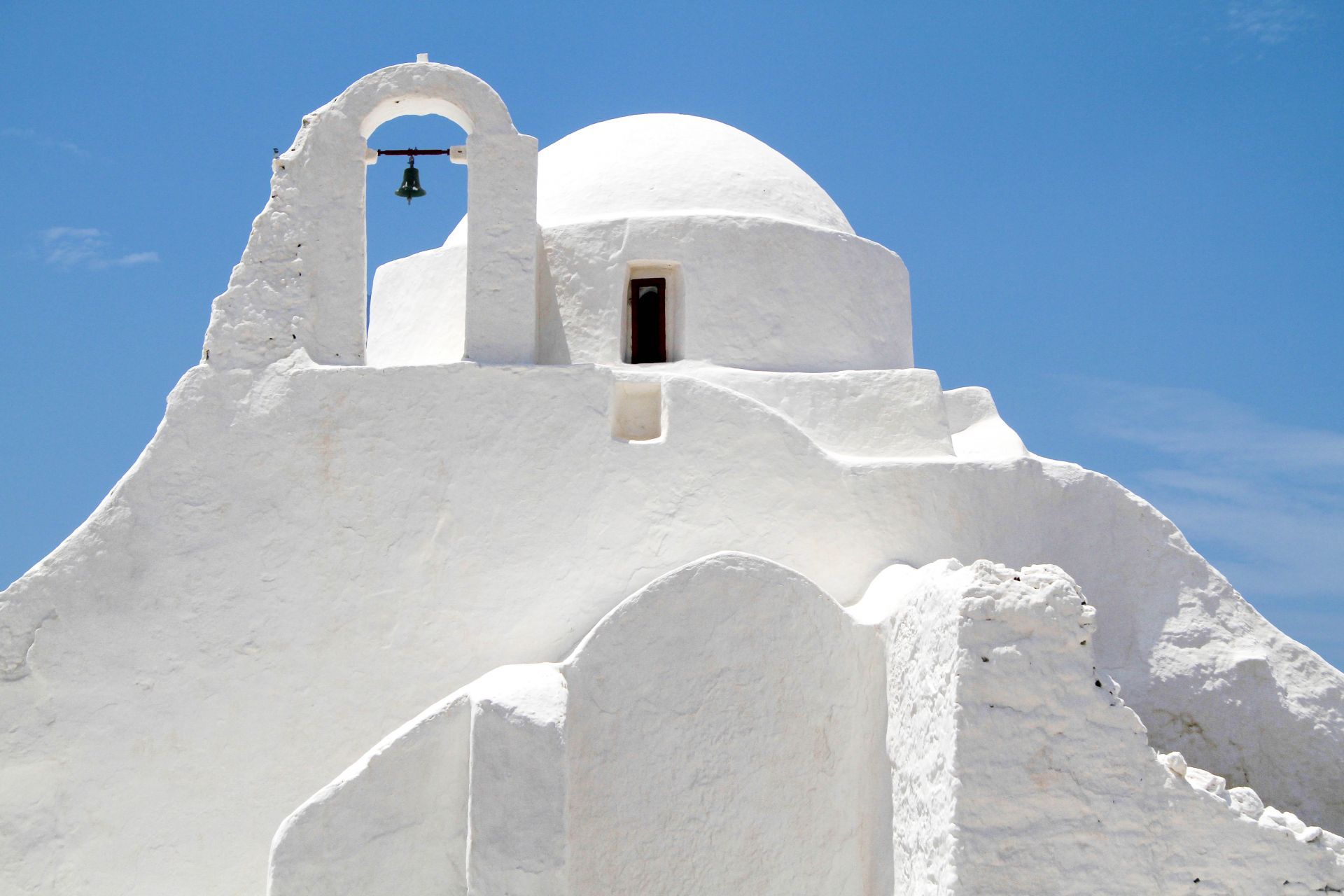