3rd Day: Early in the morning, transfer to Piraeus port to catch the boat to Milos island. Arrival at Milos and transfer to your hotel. Free time for swimming at one of the amazing beaches of  Milos.

4th Day:After breakfast at your hotel, we suggest you the Half day guided Archaeological and Cultural tour of Milos. During this tour you’ll visit the ancient theatre of Milos, the area where was discovered the statue Venus of Milos which is now at the Louvre museum in Paris, the remarkable prechristianic Catacombs of Milos, the scenic fisherman village Klima, the capital of Milos Plaka with the archaeological museum, many churches, the old narrow streets with the whitewashed houses and the little shops, the scenic fisherman village Mandrakia with the colourful door caves called Syrmata and the Sarakiniko, the famous beach with the white volcanic rocks sculpted by the time. The rest of the day free for swimming at the beach.

5th Day: Breakfast at your hotel. We propose you the Half day morning cruise to Kalogries, Kleftiko and Gerakas or the Day tour with a traditional motor boat around Milos with stop at Kimolos island. The rest of the day is free for swimming and relax in one of the 80 beautiful beaches of the island.

6th Day: Breakfast at your hotel and transfer to the port to catch the boat to Ios island. Arrival and transfer to your hotel. Ios is one of the most beautiful islands of the Cyclades. According to the ancient tradition it was the homeland of Homer’s mother and the resting place of the great epic poet. Swimming at one of the fantastic beaches of the island like Yialos beach or Koumbara beach.

7th Day: Breakfast at your hotel. We suggest you to investigate the capital of Ios, Chora, which is built on the slope of a hill. On the top of the hill there are the ruins of a medieval castle. Chora is a traditional village, a fine example of Cycladic architecture with white little houses, picturesque alleys, 12 windmills, white churches with light blue domes. On the highest spot of Chora there is the church of Panagia Gremiotissa, the most important of the 365 churches of the island. The rest of the day is free for swimming at the long sandy beach of Mylopotas with many local taverns and beach bars along the coast.

8th Day: After breakfast at your hotel, we suggest you to visit Skarkos, the early Bronze Age (2800 B.C.) settlement, found in Ios. It was built in a circular shape on a high altitude, providing to its residents very good view of the port and the sea. The settlement of Skarkos has very well organized street planning with squares and two storey buildings, stone paved floors and defensive walls. Several findings of the excavations like pottery, kitchen utensils, metal and stone tools are hosted in the Archaeological museum of Chora.

Also, we suggest you to visit the tomb of Homer in Plakoto of Ios. Homer died between 1100 and 900 B.C. He was among the greatest poets of ancient Greece and wrote the epics Iliad and Odyssey. His tomb was discovered by Pasch Von Krienen during the Russian Naval Brigade, who declared that one of the tombs found here, had an inscription that identified it as Homer’s grave. Besides, there were coins and texts by ancient historian Stravon, Pausanias and Herodotus to prove that Homer was buried here. Today, you can swim at the world famous Manganari beach. At the night time you can visit Chora, with its vivid nightlife, since Ios is well known as the best party island of Greece. 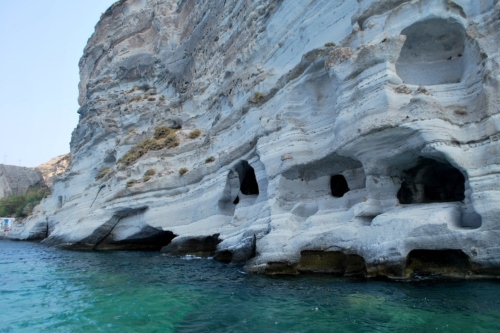 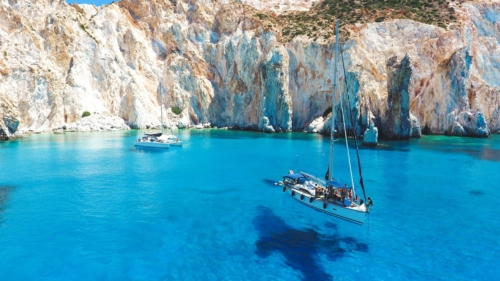 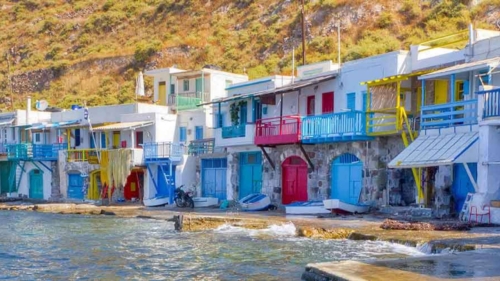