Athens  is the capital and the largest city of Greece. Athens dominates the Attica region and is one of the world’s oldest cities. Its recorded history is over 3,400 years. The earliest human presence in Athens Greece started at the 11th millennium BC. According to the ancient Athenian founding myth, Athena, the goddess of wisdom, competed against Poseidon, the God of the Seas, for patronage of the yet-unnamed city. They agreed that whoever gave the Athenians the better gift would become their patron and appointed Cecrops, the king of Athens, as the judge. Poseidon struck the ground with his trident and a salt water spring welled up. Athena offered the Athenians the first domesticated olive tree. Cecrops accepted this gift  and declared Athena the patron goddess of Athens.

The oldest known human presence in Athens Greece is the Cave of Schist, which has been dated to between the 11th and 7th millenniums BC. Athens has been continuously inhabited for at least 5,000 years. By 1400 BC the settlement had become an important center of the Mycenaean civilization and the Acropolis was the site of a major Mycenaean fortress, whose remains can be recognised from sections of the characteristic Cyclopean walls. The leading position of Athens may well have resulted from its central location in the Greek world, its secure stronghold on the Acropolis and its access to the sea. By the 6th century BC, widespread social unrest led to the reforms of Solon. These would pave the way for the eventual introduction of democracy by Cleisthenes in 508 BC. Athens had by this time become a significant naval power with a large fleet, and helped the rebellion of the Ionian cities against Persian rule. In the Greco-Persian Wars, Athens with Sparta, led the coalition of Greek states, defeating the Persian empire decisively at Marathon in 490 BC, and crucially at Salamis in 480 BC. In the following years, known as the Golden Age of Athenian democracy, during which time Athens became the leading city of Ancient Greece, with its cultural achievements laying the foundations for Western civilization. The playwrights Aeschylus, Sophocles and Euripides flourished in Athens during this time, as did the historians Herodotus and Thucydides, the physician Hippocrates, and the philosopher Socrates. Guided by Pericles, who promoted the arts and fostered democracy, Athens embarked on an ambitious building program that saw the construction of the Acropolis of Athens (including the Parthenon), as well as empire-building via the Delian League.

At the 4th century BC, the northern Greek kingdom of Macedonia became dominant in Athenian affairs. In 338 BC the armies of Philip II defeated an alliance of the Greek city-states including Athens  at the Battle of Chaeronea, effectively ending Athenian independence. Later, when the city was conquered by the Roman empire, was given to Athens the status of a free city because of its widely admired schools. The Roman emperor Hadrian, in the 2nd century AD, ordered the construction of a library, a gymnasium, an aqueduct , several temples and sanctuaries, a bridge and  the Temple of Olympian Zeus. By the end of Late Antiquity, Athens had shrunk due to sacks by the Herulians, Visigoths, and Early Slavs which caused massive destruction in the city. At this period, the first Christian churches were built in Athens, and the Parthenon and other temples were converted into churches. After the Fourth Crusade the Duchy of Athens was established. In 1458 it was conquered by the Ottoman Empire and entered a long period of decline. After the Greek War of Independence and the establishment of the Greek Kingdom, Athens became the capital of the newly independent Greek state in 1834. At that time, it was a town of about 4,000 people in a loose swarm of houses along the foot of the Acropolis.

The first King of Greece, Otto of Bavaria, commissioned the architects Stamatios Kleanthis and Eduard Schaubert to design a modern city plan fit for the capital of a state.  Neoclassicism, the international style of this period, was the architectural style through which Bavarian, French and Greek architects such as Hansen, Klenze, Boulanger or Kaftantzoglou designed the first important public buildings of the new capital. In 1896, Athens hosted the first modern Olympic Games. During the 1950s and 1960s, the population of the city exploded, and Athens expanded. In 2004 Athens hosted the 2004 Summer Olympics.

Athens Greece  is built around a number of hills. Lycabettus is one of the tallest hills of the city and provides a view of the entire Attica Basin. The Cephissus river, the Ilisos and the Eridanos stream are the historical rivers of Athens. The Attica basin is bounded by four large mountains: Mount Aigaleo, Mount Parnitha, Mount Pentelicus  and Mount Hymettus. Mount Parnitha is the tallest of the four mountains (1,413 meters ) and has been declared a national park. The Saronic Gulf lies to the southwest. The Athens Metropolitan Area  spans 2,928.717 km2  within the Attica region and includes a total of 58 municipalities, having reached a population of 3,737,550. Athens is served by the Athens International Airport, located near the town of Spata, in the eastern Messoghia plain, some 35 km east of center of Athens. The airport, awarded by the “European Airport of the Year 2004”.

A large part of the historic center of Athens Greece, has been converted into a 3-kilometre pedestrian zone (the largest in Europe), leading to the major archaeological sites (“archaeological park”), reconstructing – to a large degree – the ancient landscape.  The tour starts at the temple of Olympian Zeus (6th c. B.C.), one of the largest in antiquity and close by Hadrian’s Arch (131 A.D.), which forms the symbolic entrance to the city.  From there, walking along Dionysou Areopaghitou Street (on the south side of the Acropolis) you pass the ancient Theatre of Dionysos (5th c. B.C.) where most of the works by Sophocles, Euripides, Aeschylos and Aristophanes were performed.  Continuing, you will reach the ruins of the Asklepieion (5th c. B.C.) and the Stoa of Eumenes (2th c. B.C.) and from there the Odeion of Herodes Atticus (Herodeion), which was built in 161 A.D. and is nowadays the venue of the performances of the Athens Festival. From there you climb up to the sacred rock of the Acropolis, the site of some of the most important masterpieces of worldwide architecture and art, the most renowned of which is the Parthenon temple.  Apart from this, also impressive are the Propylaea, the temple of the Athene Nike and the Erechtheion, while you must not skip a visit to the Museum, located close to the Parthenon.  Moreover, from the rock you have an impressive view of the city. Only 300 meters away from the sacred rock of Acropolis stands the impressive Acropolis Museum, one of the most important contemporary works of architecture in Athens. It is made of steel, glass and concrete and it houses 4,000 priceless finds from the Acropolis monuments that represent its history and function as the most important religious center of ancient Athens. Coming down from the Acropolis you arrive at the Areios Pagos, the most ancient law court of the world.  Opposite it is Philopappou Hill, with its beautiful cobbled little roads and the Roman monument by the same name on its top, while close by is the Pnyx, where the citizens of ancient Athens used to assemble and exert their democratic rights. Walking  along the pedestrian road you arrive at the Ancient Agora, which was the commercial, political and religious center of ancient Athens.  A visit to the archaeological site will give you the opportunity to become acquainted with the workings of Classical Athenian democracy. From there, via Ermou Street, you arrive at the Kerameikos, the largest cemetery of the ancient city, with impressive tomb sculptures. The Iridanos River, sacred in antiquity, runs through the archaeological site.

The heart of the historic center is the neighbourhood of  Plaka, which has been inhabited without interruption since antiquity.  When you walk through the narrow streets lined with houses and mansions from the time of the Turkish occupation and the Neoclassical period ,you will have the impression of travelling with a “time machine”.  You will encounter ancient monuments, such as the Lysikrates Monument, erected by a wealthy donor of theatrical performances, the Roman Agora with the famed “Tower of the Winds” (1st c. B.C.) and Hadrian’s Library (132 A.D.), scores of bigger and smaller churches, true masterpieces of Byzantine art and architecture, as well as remnants of the Ottoman period (Fetihie Mosque, Tzistaraki Mosque, the Turkish Bath near the Tower of the Winds, the Muslim Seminary, et al.).  There are also some interesting museums (Folk Art, Greek Children’s Art, Popular Musical Instruments, Frysira Art Gallery, etc.), lots of picturesque tavernas, cafés, bars, as well as shops selling souvenirs and traditional Greek products.

The southern suburbs of Athens Greece, located on the coast of the Saronic Gulf, offer many opportunities to take a walk along the seaside, while you will also find many beautiful organized and free beaches, large shopping centers and nightclubs (especially during the summer).  In the Maroussi suburb (north of the center) are the facilities of the Olympic Athletic Center of Athens, where the majority of the athletic events were held during the 2004 Athens Olympic Games. Kifissia (north of Maroussi) is also worth a visit, with its beautiful villas and impressive mansions.

Moreover, if you wish to leave the center behind you, you may visit, amongst others, the neighboring town of Piraeus-main port of Athens, the Daphni Monastery (11 km. west), one of the most significant Byzantine monuments of the country of the 12th century with unique mosaics, the Kaisariani Monastery (5 km. east), which was founded in the 2nd century, the Temple of Poseidon (5th c. B.C.) on Cape Sounion (58 km. south), following a wonderful route along the coast, the area of the battle of Marathon (490 B.C.) with the Tomb of Marathon, the archaeological sites of Eleusina (23 km. west), the Amphiareion of Oropos (48 km. northeast), of Vravrona (38 km. east) and Rhamnous (close to Marathon), as well as the wonderful surrounding mountain massifs of Parnitha, Penteli and Hymettos, all suitable for hiking.

In Athens Greece you  can find high standard hotel acommodation, dining and nightlife, modern means of transportation, great opportunities for shopping and above all the hospitality of its inhabitants.  In a nutshell, Athens is a city that fascinates every visitor, during all seasons.

The ancient Athens of the Golden Age was a powerful city-state, a center for the arts, learning and philosophy, home of Plato’s Academy and Aristotle’s Lyceum. Athens Greece is referred to as the cradle of Western civilization and the birthplace of democracy,  because of its cultural and political impact on the European continent, and in particular the Romans.  Nowadays, Athens is a large cosmopolitan metropolis and the center of economic, financial, industrial, maritime, political and cultural life in Greece. 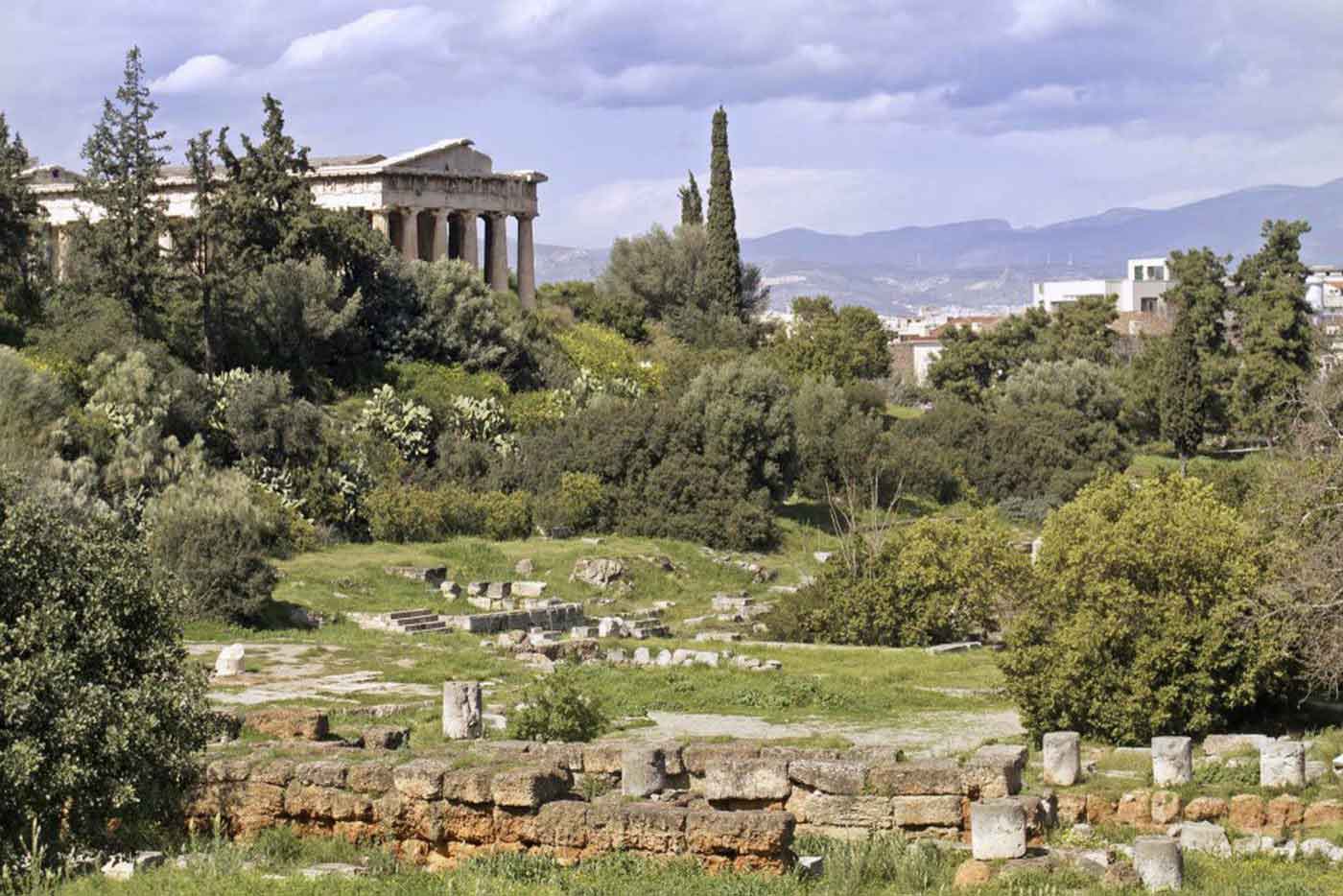 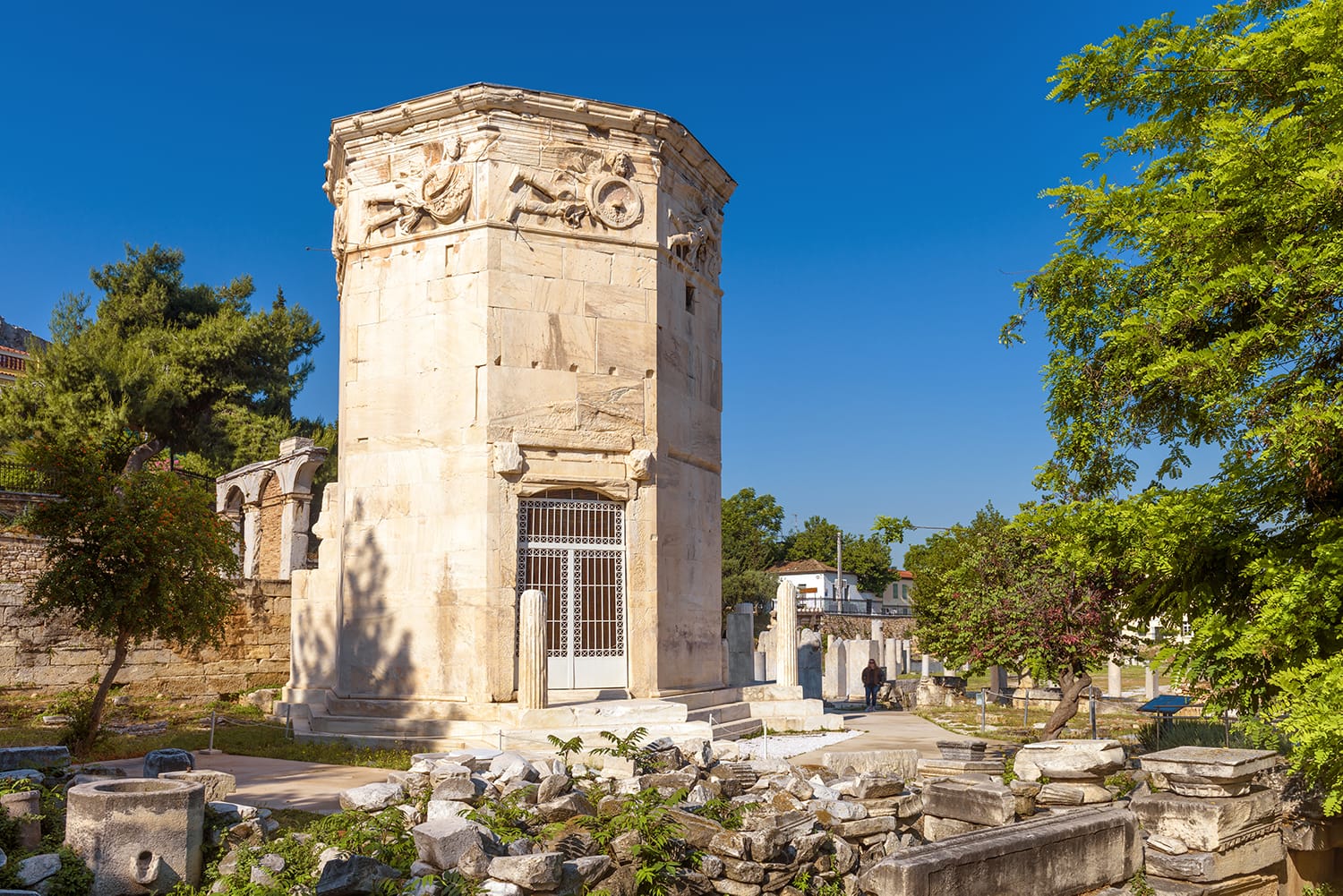 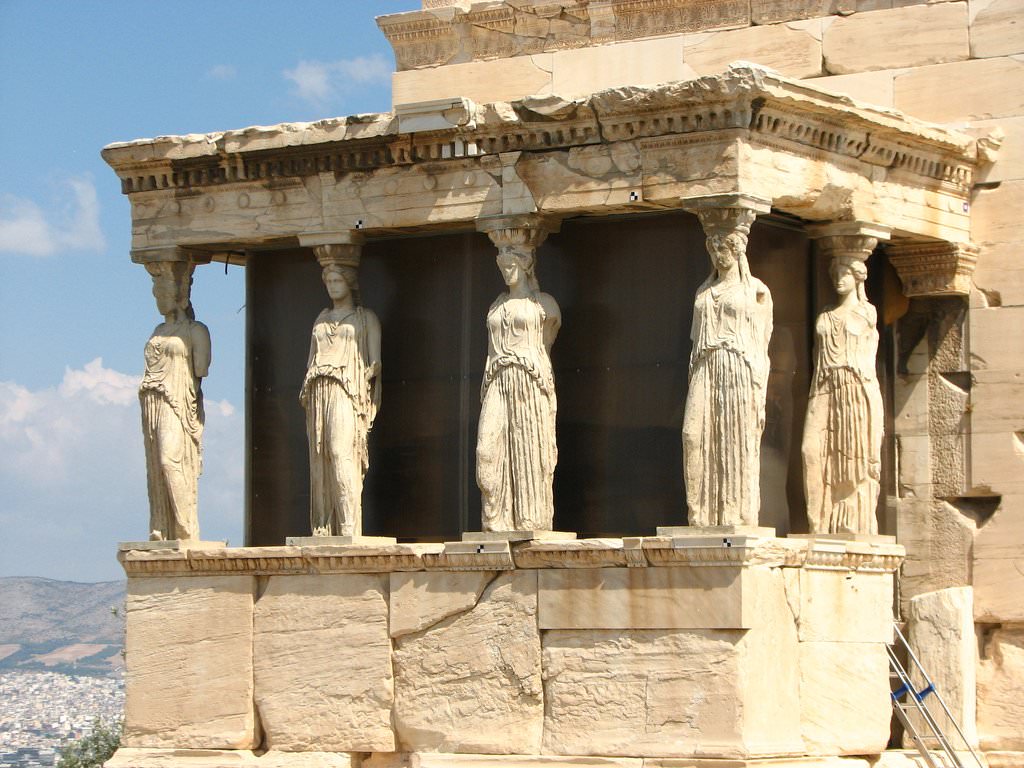 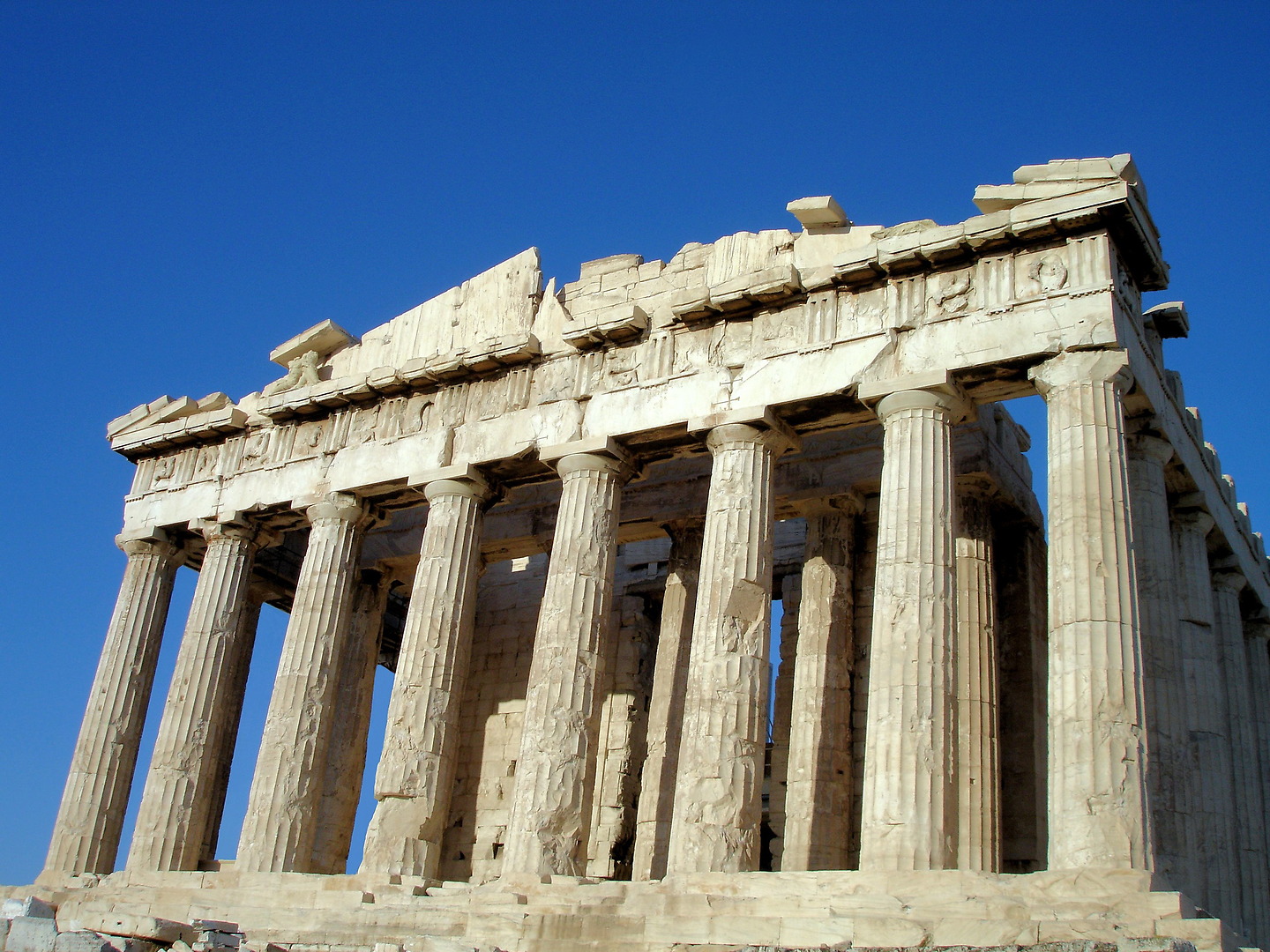