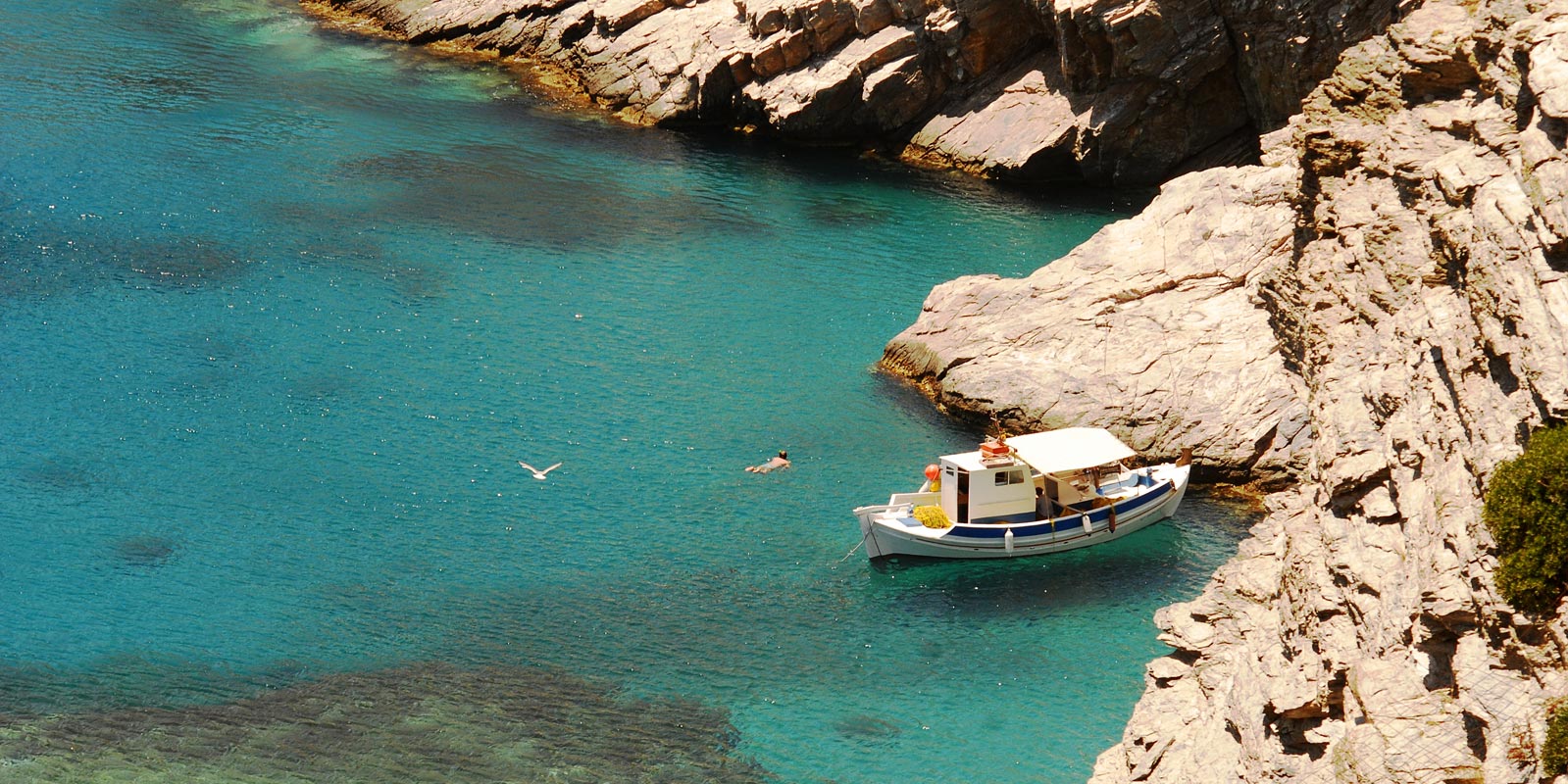 Amorgos Island Greece is the most eastern island of the Cyclades complex and the nearest island to the Dodecanese island group.  Amorgos has a land area of 126 square kilometres  and  population of 1,973 inhabitants. In the Early Cycladic period, Amorgos was the origin of many famous Cycladic figurines. ‘Dokathismata style’ figurines were originally found here. ‘Kapsala Cycladic figurines’, dating around 2700 B.C., are named after a find place in Amorgos. In the classical period, part of the island was named Aspis, where the ancient temple of the goddess Aphrodite were built. In approximately 630 BC, the poet Simonides led the foundation of a Samian colony on Amorgos. The island  was a member of the Delian league. In 322 BC, Athens and Macedonia fought the naval Battle of Amorgos.

The names of the three cities are Arkesini, Minoa, Aigiali or Melania which, according to inscriptions, are the most correct. The three towns are on the island’s west coast because that is where bays and natural ports that could provide the proper positioning for seaside towns and forts exist. Aigiali was on the north East Side of the island close to the present day locations of Tholaria and Stroumvos and to this day can still be found there. Minoa is situated at the center of the northern side near the present day village of Katapola and Arkesini close to the present-day lowland location Kastri. Excavations and findings, especially burial tombs, prove the presence of Amorgos during the prehistoric period and particularly during the first period of Cycladic civilization (3200 to 2000 BC).

Amorgos is the island of contrasts. On one side, mountains and on the other, steep slopes ending up on fairytale beaches with crystal clear waters. The sudden changes in the landscape enchant visitors, causing them an explosion of pleasant and intense emotions.

A landmark of the island, the monastery of  Panagia Hozoviotissa  is situated northeast of Chora. It was built in order to protect a religious icon, dating from the year 812, from intruders. The icon is on public display inside the monastery. According to tradition, the monastery was founded by the Byzantine Emperor Alexios I Komnenos in 1088, during the period of Iconoclasm, when the icon of  Virgin Mary  was sent by a woman from Hozovo of Palestine and miraculously made its way to Amorgos. According to another version, the Monastery was founded in the 9th century by monks from Palestine and was later renovated by the emperor Alexios I Komnenos. The monastery has eight floors connected by narrow stone staircases carved into the rock. 350 steps lead you to the monastery, the interior of which is like a labyrinth. The cells of the monks are all carved into the rock to form a unique example of traditional architecture. Two icons of the Virgin Mary and other religious relics from the period of Alexios Komninos have been found at the monastery. Important heirlooms such as a manuscript, gospels, vestments and ecclesiastical utensils dating from the 10th to the 19th century are also on display. On the 21st of  November, every year, there is a celebration of the Presentation of the Virgin Mary, the highlight of which is the procession of Her holy icon. After the procession there is a massive feast with plenty of food, wine and delicious traditional sweets.

In Amorgos you will get familiar to the hospitality of the Greek people. Its inhabitants generously offer unforgettable moments to the visitors. They are good and honest people and despite tourist growth in recent years, they remain pure and loyal to their local tradition and culture. Throughout the summer and the rest of the year, feasts are held and customs revive, being maintained since the old days. Feasts of “psimeni raki” (the local spirit drink), “pasteli” (sesame seeds and honey candy), music, running races, Amorgos gastronomy days, diving competitions are just some of the new activities that locals and tourists have embraced.

The capital of the island, Chora is located at the center of the island and it is considered to be one of the most picturesque in the Cyclades. Here you can admire a breathtaking setting with scenic squares, traditional Cycladic houses with bougainvillea trees in their court yards and Lilliputian whitewashed alleys.

Katapola, is the main harbor of the island as well as a haven for boats and small cruise ships.

Aigiali, being the second harbor of Amorgos Island is very popular among young people. Along its lively waterfront you will find plenty of cafes and restaurants. Perched on the mountain side beyond Aigiali there are three picturesque villages: Tholaria, Lagkada and Potamos.

The most famous beaches of Amorgos island are the following :

Amorgos Island Greece, is one of the most impressive Cycladic islands, with beautiful beaches with azure waters, gorgeous caves, ideal spots for diving, scenic bays and ancient footpaths leading through its steep rocky terrain. Amorgos island is the ideal summer holiday destination. 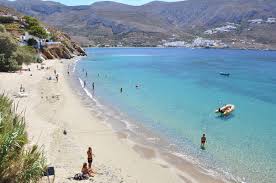 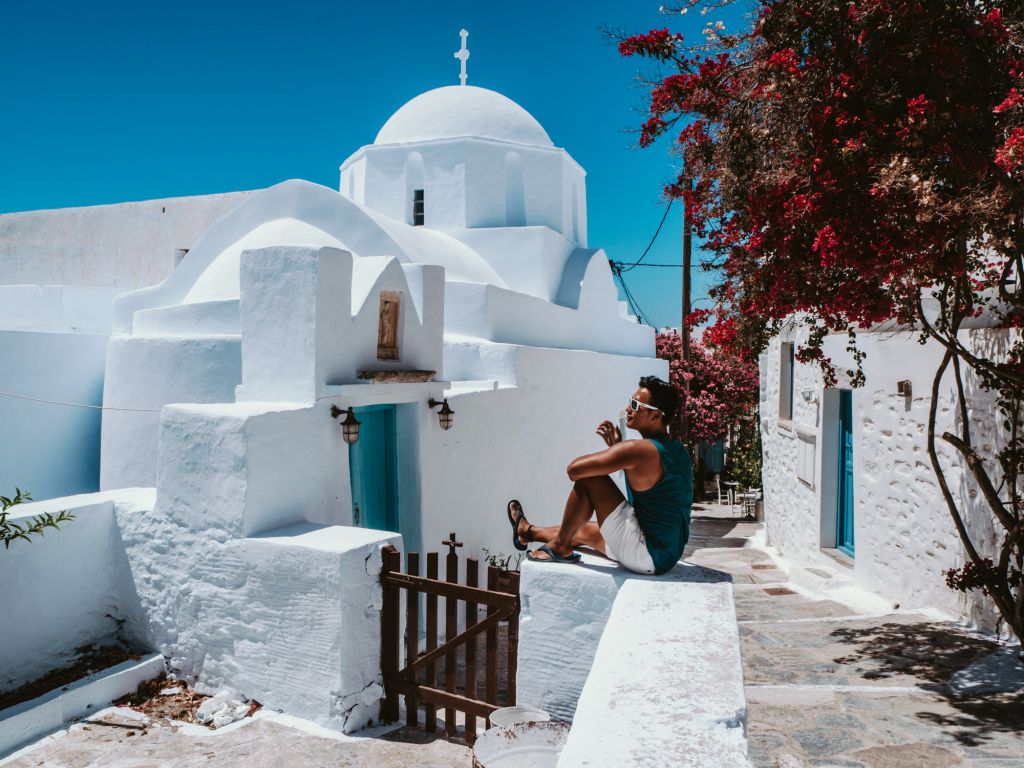