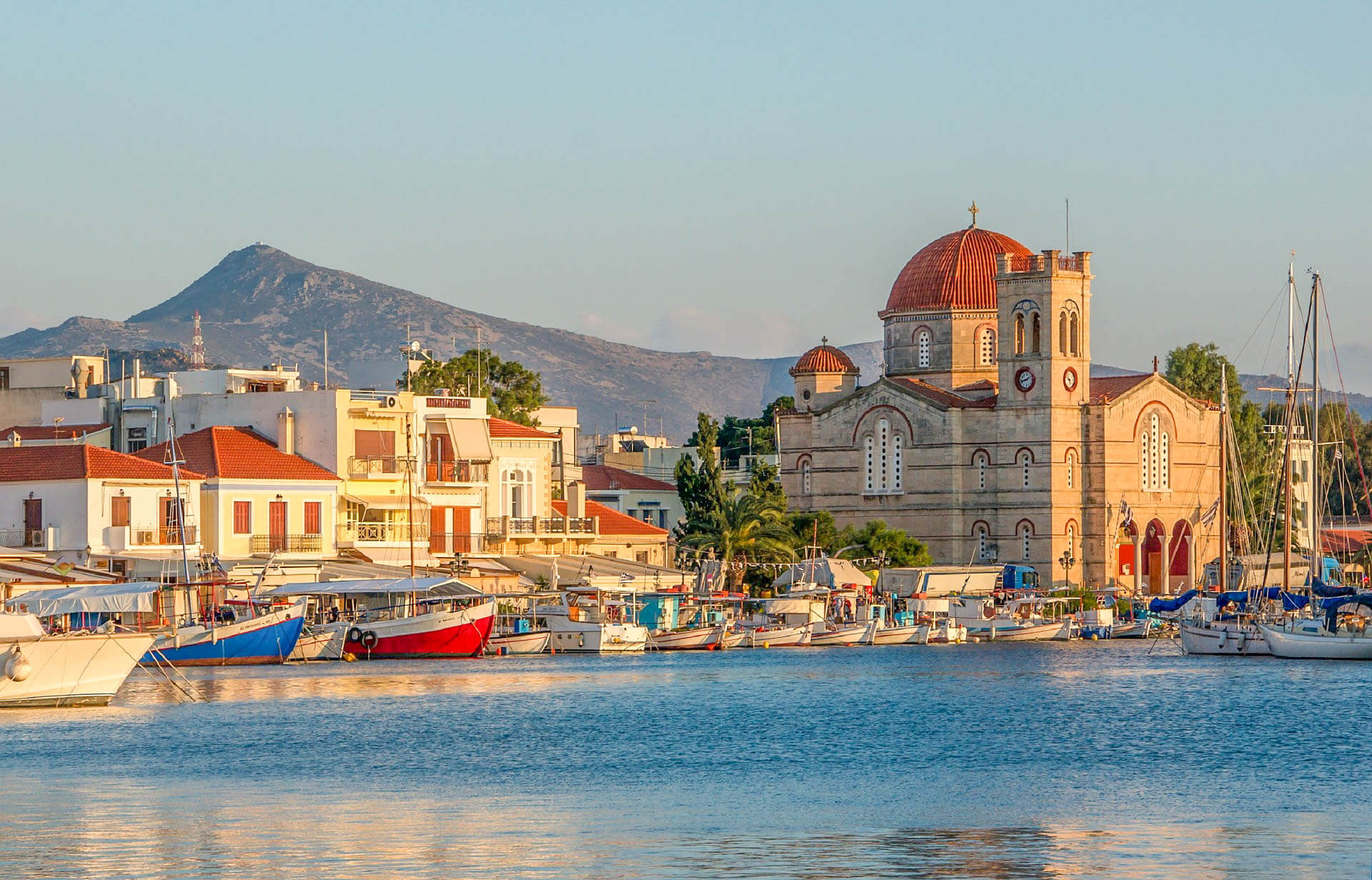 Aegina Island Greece, is one of the Saronic Islands, located 26 km south of Athens. The name of the island comes from Aegina, the mother of the hero Aeacus, who was born on the island and became its king. The area of  Aegina is 87.41 km2 and its population is 13.056 inhabitants.

According to the Greek mythology, Aegina was a daughter of the river god Asopus and the nymph Metope. She bore at least two children: Menoetius by Actor, and Aeacus by the god Zeus. When Zeus abducted Aegina, he took her to Oenone, an island close to Attica. Here, Aegina gave birth to Aeacus, who would later become king of Oenone; thenceforth, the island’s name was Aegina.

Aegina, according to Herodotus, was a colony of Epidaurus, to which state it was originally subject. Minoan ceramics have been found in contexts of c. 2000 BC. The famous Aegina Treasure, now in the British Museum is estimated to date between 1700 and 1500 BC. It is probable that the island was not Doricised before the 9th century BC. One of the earliest historical facts is its membership in the Amphictyony of Calauria, attested around the 8th century BC.

Aegina island, the first city-state that issued coins in Europe, the Aeginetic stater. One stamped stater can be seen in the Bibliothèque Nationale of Paris. It is an electrum stater of a turtle, an animal sacred to Aphrodite, struck at Aegina that dates from 700 BC. Therefore, it is thought that the Aeginetes, within 30 or 40 years of the invention of coinage in Asia Minor by the Ionian Greeks or the Lydians (c. 630 BC), might have been the ones to introduce coinage to the Western world. The Aeginetic stater was divided into two drachmae of 6.1 grams of silver. Staters depicting a sea-turtle were struck up to the end of the 5th century BC. During the First Peloponnesian War, by 456 BC, it was replaced by the land tortoise.

The findings in the area of Kolona as well as other areas show that the first inhabitants in Aegina appeared in the second half of the 4th millennium B.C. (3500-3000 B.C.). The first inhabitants came from Peloponissos. The colonization of the island continued with the Aegeans during (2500-2000 B.C.). They settled in Kolona and they were occupied with shipping and trade. Around 1400-1300 B.C., the Mirmidones settled down in the area of Oros. They came from Thessaly and they set up the Temple of Zeus. At about 950 B.C., the Dorians came to the island. Around the 7th century B.C. ,Aegina along with Poros island and five other cities take part in the Amphictyony of Calauria. The Amphictyony was at first religious and then it became a political federation.

In Kolona, there were beautiful houses, public buildings, temples and the town was well fortified. It became the Acropolis of the island surrounded with strong walls. It had a military port and a commercial port and its population consisted of 40.000 free citizens and 400.000 slaves. Around 500 B.C. Aegina island was a strong naval power, controlling the trade of the East Mediterranean and the Black Sea and reached the highest point of power and wealth. In 480 B.C the state of Aegina, took part in the naval battle of Salamina along with the other Greeks against the Persians.

During the Peloponnesian War (431-404 BC) the Athenians expelled the Aeginians to the Peloponnese and brought Athenians to the island. After the end of the war, Lysander brought the Aeginians back to Aegina. After the death of Alexander the Great, Aegina belonged to the Achaean Confederation. The fleet of the King of Pergamon and the Romans besieged, defeated and captured the city, which they looted and destroyed. Later, around 133 BC, Pergamon bequeathed Aegina to the Romans, who led the island to collapse. After 400 AD, many Peloponnesians fled to Aegina to escape the raids of the Goths. The population increased, the city was rebuilt and trade was revived. Aegina, due to the peculiarity of the soil that represented most of the island, received many raids. In the 6th century AD. from the Avars and then, during the 9th century AD, the invasion of the Saracen pirates, which forced the inhabitants to withdraw from the coast and build Paleochora.

The first Ottoman rule lasted from 1540 to 1687. Then the Venetian Morosini and the Venetians recaptured Aegina, trade was revived and the economy improved. From 1715 to 1821 we have the second Turkish occupation, until the Revolution of 1821, in which Aegina played an important role. The Aeginians fought at Hani of Gravia, at the Battle of Mount Athos, at Faliro and helped supply the Acropolis with Favieros. In 1828 it became the first capital of Greece with the first governor Ioannis Kapodistrias. In 1829 the capital was moved to Nafplio and the population of Aegina decreased considerably and so Aegina, after a slight rise in the period when it was the capital, returned to the old quiet life of a provincial town.

Aegina Island Greece, although is a small island, boasts a great number of sights and natural beauties, highlight of which is the famous Aphaia Temple. It forms in fact an equilateral triangle with the Parthenon and the Temple of Poseidon at Sounion, the so-called “holy triangle” of the antiquity.

Aegina town, the capital of the island, stands out for its well-preserved buildings. On the outskirts you can find charming little villages with distinctive traditional character, such as Kypseli, Agii and Vagia as well as organized tourist resorts like Agia Marina, Perdika, and Souvala. Aègina is also surrounded by many smaller islands (Moni, Metopi, Diaportia, Lagouses, Kyra, Dorousa, Spalathonisi, Anonyma) that can be reached by boat from the port of Aegina.

In 1896, the physician Nikolaos Peroglou introduced the systematic cultivation of pistachios, which soon became popular among the inhabitants of the island. By 1950, pistachio cultivation had significantly displaced the rest of the agricultural activity due to its high profitability but also due to the phylloxera that threatened the vineyards that time. As a result, in the early 60s, the first pistachio peeling factory was established in the Plakakia area by Grigorios Konidaris. The pistachios of Aegina island are considered internationally excellent and superior to several foreign varieties, due to the special climatic conditions of the island  as well as soil’s volcanic characteristics. In recent years, in mid-September, the Pistachio Festival has been organized every year under the name “Fistiki Fest”.

At Aegina island, you can visit the following museums and sightseeings:

The most important beaches of Aegina Island are the following :

The best way to discover the hidden beauties of Aegina Island Greece is to choose the One Day Cruise to 3 islands Hydra Poros Aegina of Kaningos Tours.  The island of Aegina is one of the most popular tourist destinations during the summer months due to its proximity to Athens, with quite a few Athenians owning second houses on the island. 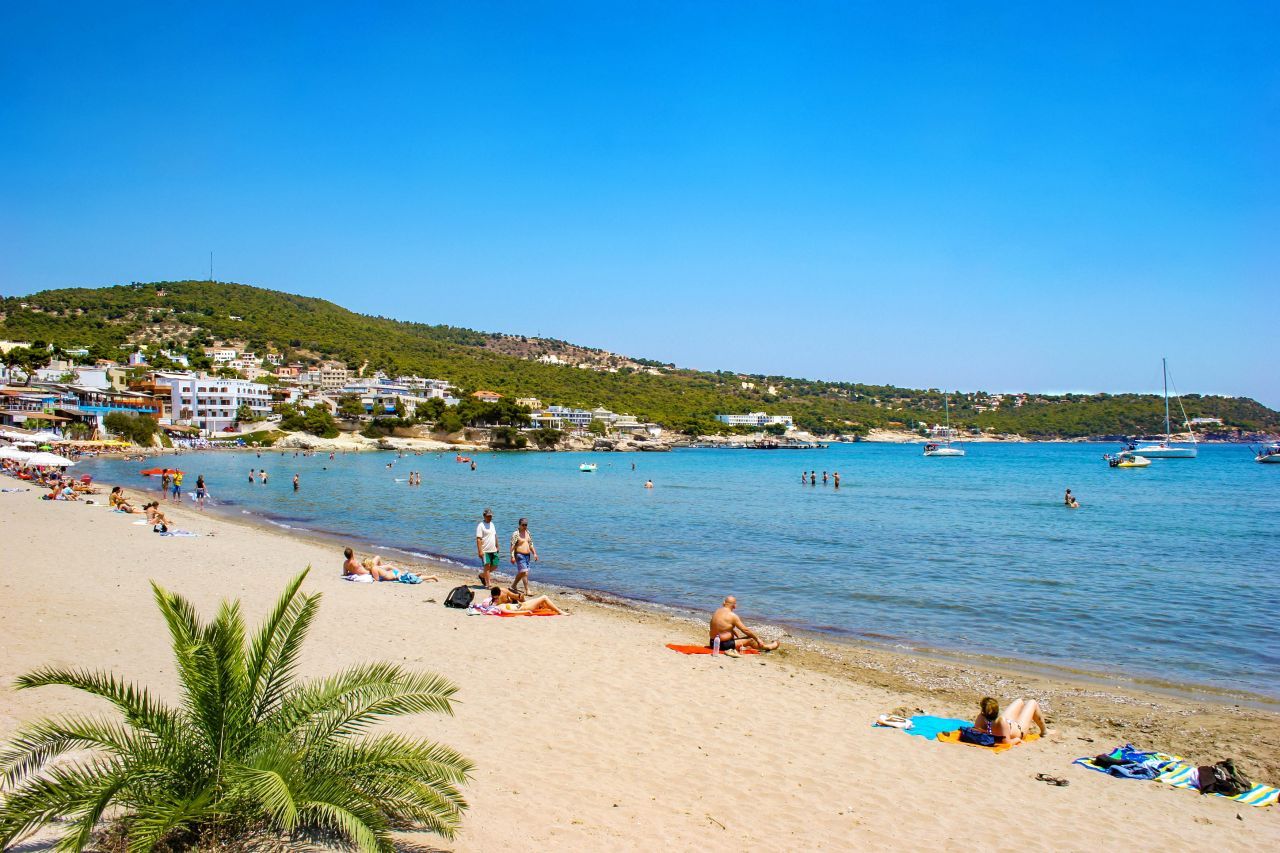 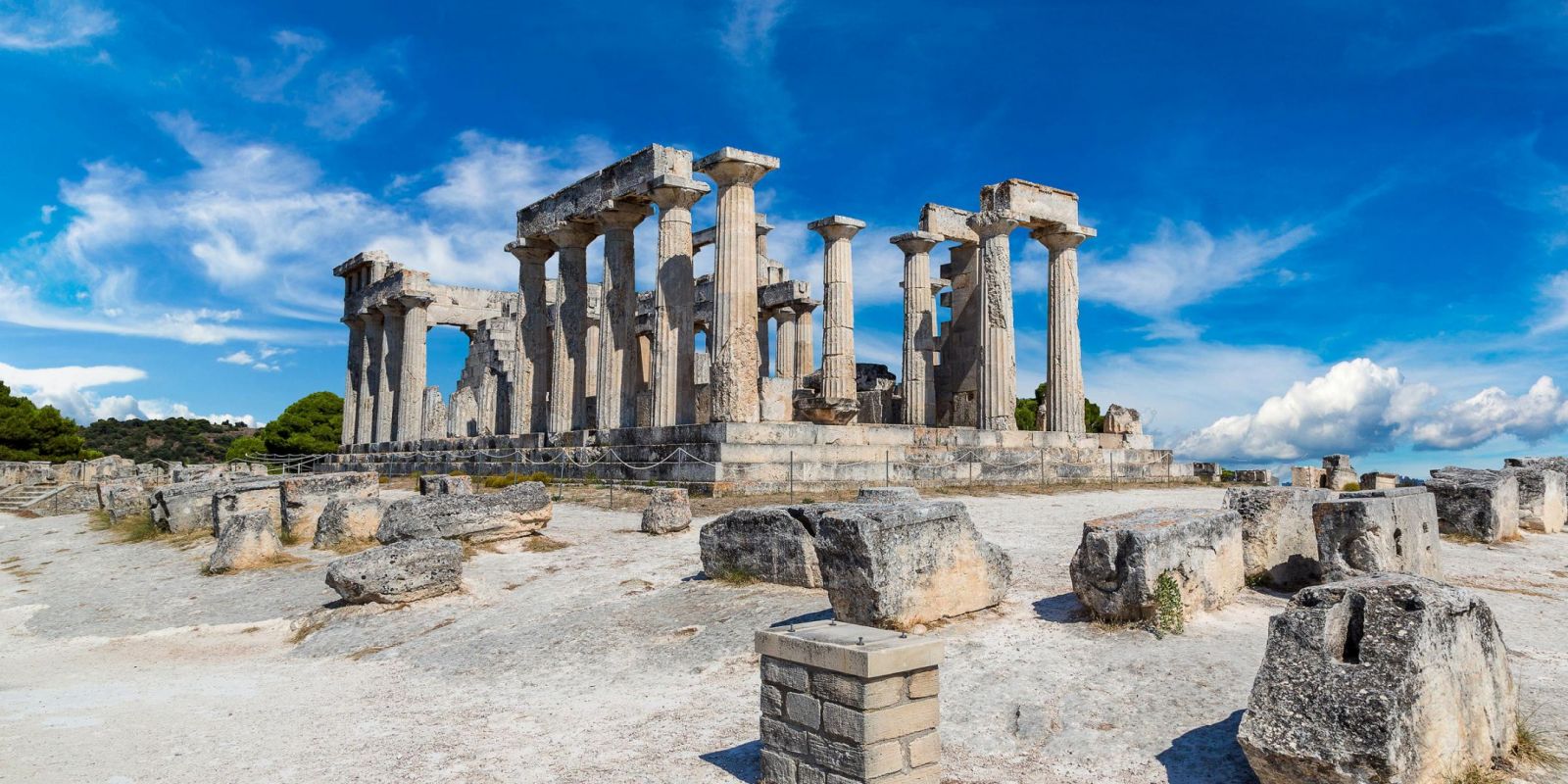 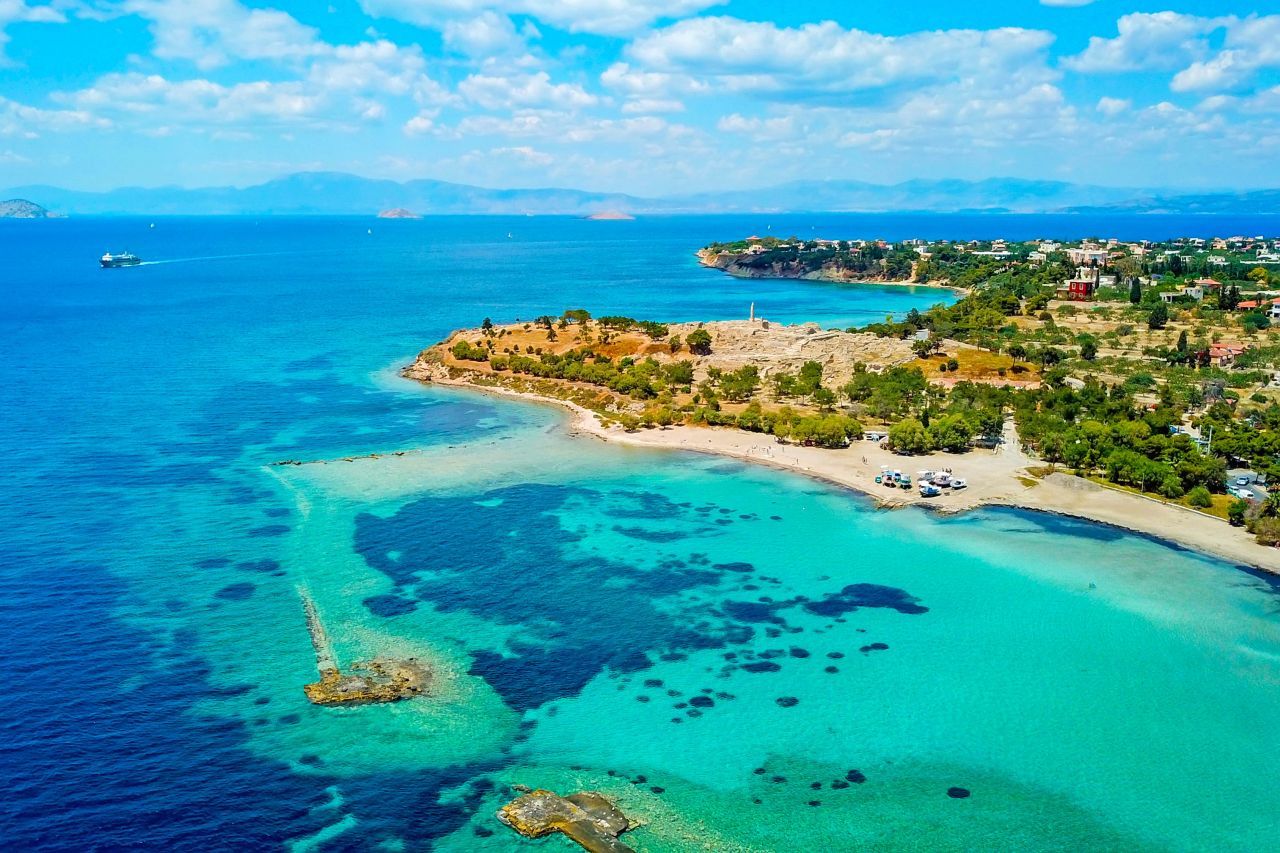